What's Been Happening in Costa Rica!

While I had the easy life in the States Don was here in Costa Rica working on getting our electricity underground from the Public Road up our driveway to our home site.  It all started with the digging of a trench up the center of our driveway. 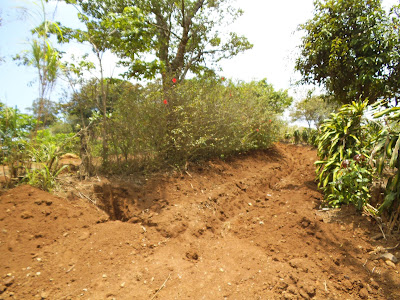 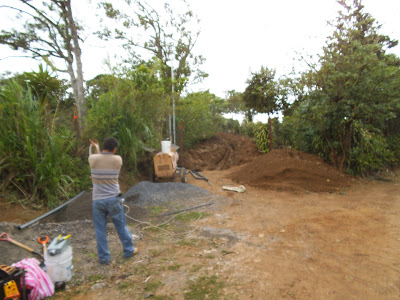 The next step involved renting a cement mixer and building concrete pillars and incorporating all the electrical wiring before putting it underground. 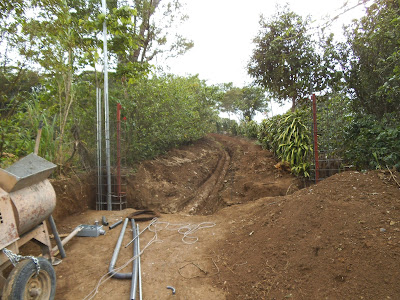 Forms were created and the electrical conduits fore the wiring were situated in the center.

The wire form required to create the columns which will be used to support our wrought iron gate.  The Gate is being custom made and, I believe, is now ready to be installed. 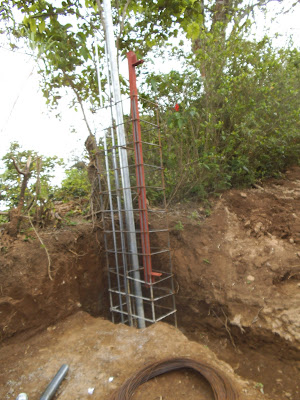 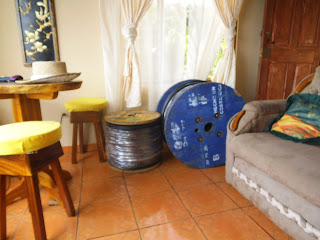 During the column construction period our house became storage for the expensive wiring that was needed.  Minor, the man doing the construction, also became a fixture in our home.   Minor and Don had their moments while being roommates and in the end we hired someone else to finish the job.

As the columns progressed we were required to add concrete boxes along the route up the driveway that would make repairs easier in the future. 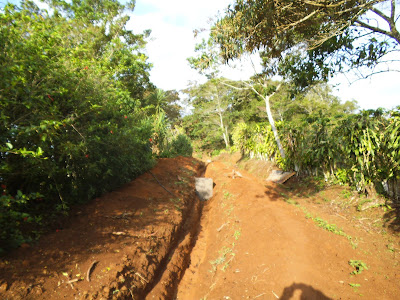 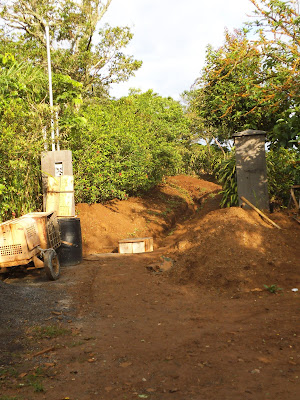 The ditch became a little larger and the columns started looking like columns! 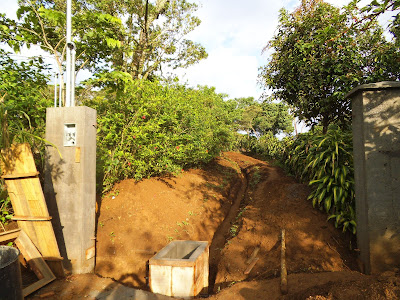 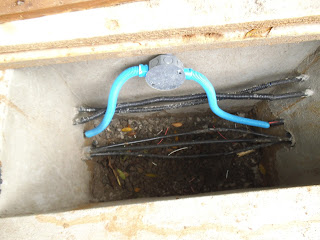 This is a view of the inside of the Concrete Boxes.

The columns are complete and now tops need to be made for the boxes out of sheets of metal to cover the insides.  The tops were finished fairly quickly, although not the correct size.  In order for the tops to fit, Don had to chisel about 5 mm. off the sides of each box. Once this was completed, strips of plastic were placed over the wire conduit to alert anyone digging that there are electrical wires below. 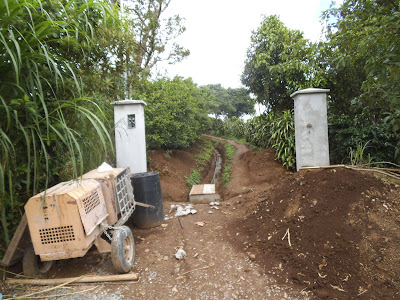 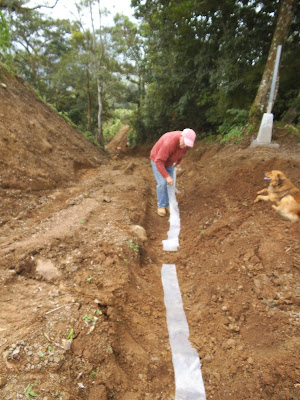 Skeeter and I both helped to lay plastic!  He He! 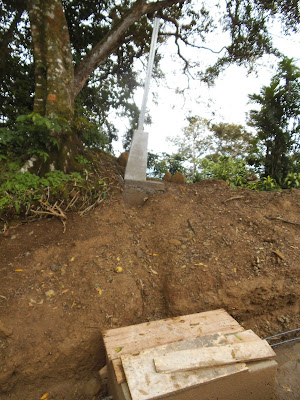 In addition to the columns and laying the electrical wiring we also had 3 lamp post created along the driveway to light the way to our home. 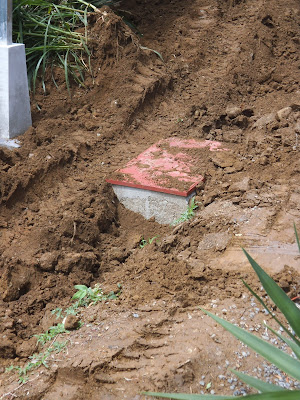 A view of the elelctrical box with the cover in place.

The next step is to cover up the ditch.  Here Jeffery, Roberto's son, is digging dirt away from the Cana where it has been pushed by earth moving equipment previously working on the driveway. 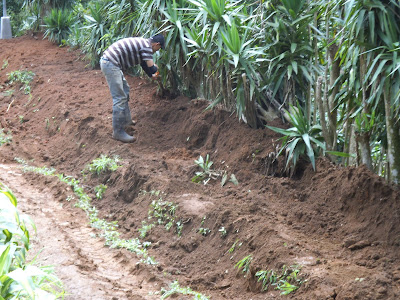 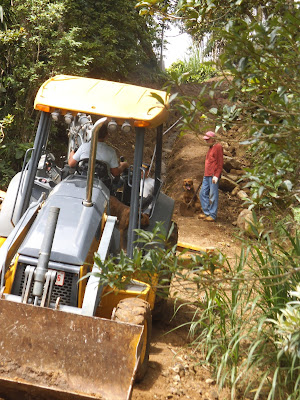 Paco returned with his backhoe to fill in the ditch where we had the electrical buried and readied our driveway for gravel and compacting, the next step.  Once he was finished Don and I  did some hand work to dig ditches along the side of the road and fill in holes to prevent erosion.  Quite a job for the two of us with Don's bad arm and me loafing for 3 months. 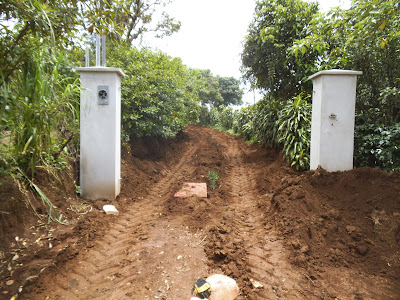 The columns, boxes and buried wiring are done and now we are ready to install our gate, add gravel and compact!!  So many steps. 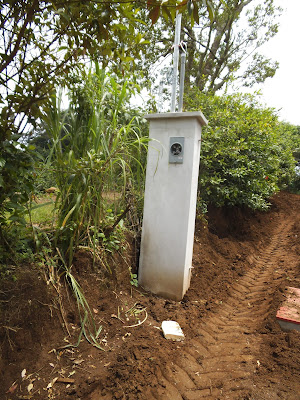 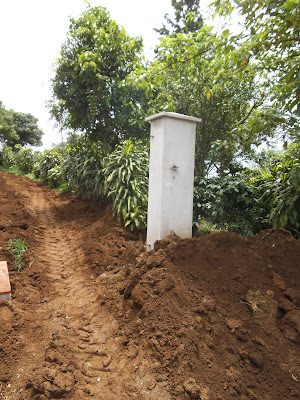 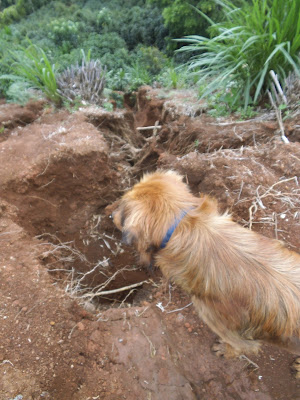 Up on top of the hill, while all the above was going on, there has been a bit of erosion along the side of our home site down through the coffee.


Skeeter is checking out the damage!  Don says, " No problem, we now know where to put the 1/2 round." 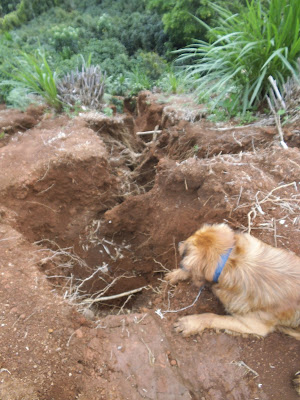 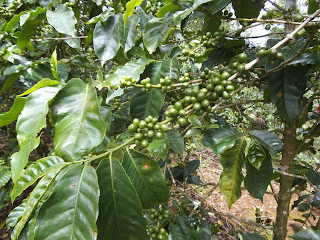 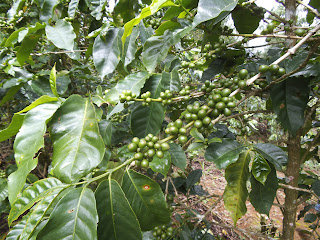 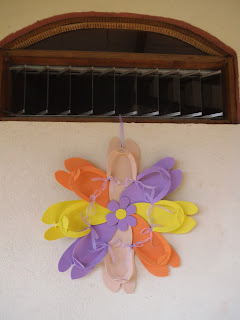 After 3 months in the states I am back in Costa Rica catching up and doing a little creating.  Here's the story of my trip!


We all went to a Rockies game, which they won in overtime and just enjoyed spending time together. 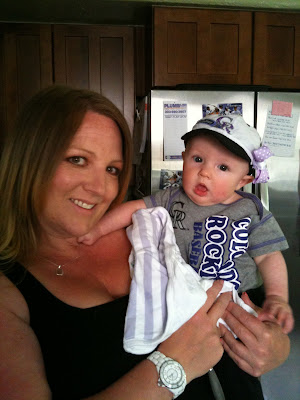 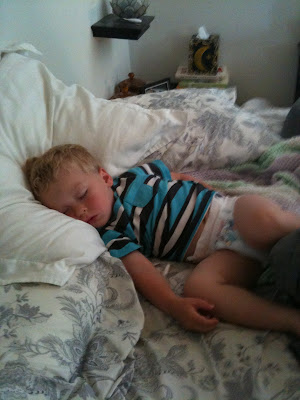 The day I left Matthew, Molly and Cody, Cody was sound asleep and not interested in waking up.  Probably a good thing as I was riding a roller coaster of emotions!  Sweet dreams precious boy it was fun playing with all of you!

Benjamin is one amazing ball player!!  We spent one day watching 3 games of a tournament that his team won!  At the end of the day we were all pretty tired but very proud!  Way to go Ben! 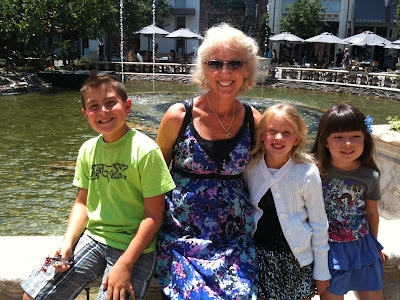 The week was filled with lots of fun activities including some wonderfully relaxing mornings and movie evenings!  It was Mistaya's (remember Flat Mistaya?  The blonde in the photo is the real Mistaya) Birthday and there was much to do.  Tamara and I painted her bedroom including lots of new accessories.  We drove to LA to the American Girl Store and came home with 2 look alike American Dolls.  One for Mistaya and one 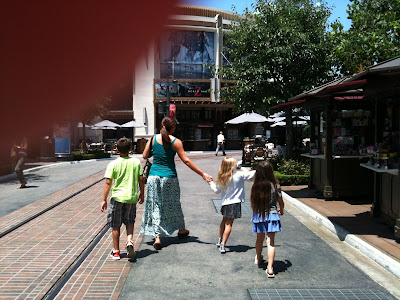 for her friend Kieley.  (Sorry if this is spelled incorrectly)  Once done exploring American Girl, we drove to Hollywood to check out the sites, look for stars and have some lunch!  A fun day enjoyed by all and leaving once again was such sweet sorrow!!

Sharon and Don
NOTE: To enlarge photos single or double click on the photo. Really increases the detail! Enjoy!